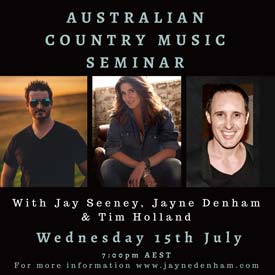 If there was ever a seminar which Australian Country Music artists needed to join, it is this one.

The Country Music Seminar is designed for artists who are looking for the solutions to help their career go to the next level and learn the secrets that are key to a successful career.

Jay Seeney, Jayne Denham and Tim Holland are all well known and highly respected in the Country Music industry and have the insight to give direction on what you need to be doing to achieve success in the industry. Knowledge is power and you'll learn exactly what it takes and how to build a successful long term career from real experts in the field.

Getting this information elsewhere would run up in the thousands.

It will run for 2 hours via Zoom & is limited to the first 20 people only so we can deliver specific information and answer questions from our participants.

Reserve your spot quickly so you don't miss out and we will see you there. 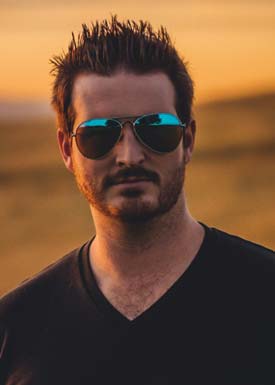 Jay's video style revolves around highlighting Australia?s best artists in some of the most desirable locations around the country. 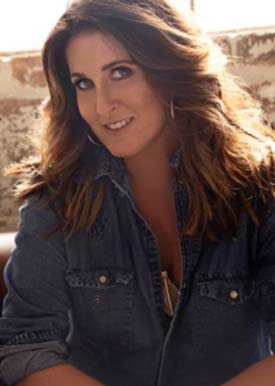 Jayne Denham is a recording artist and a songwriter. She has released four albums, toured Australia, New Zealand, the USA and parts of Europe. Before launching her own career she worked in recording studios - doing her first sessions at the age of 14 - and has sung backing for many artists including Tina Arena at the ARIA Awards.

Her Country Music career kicked off in 2007 with the release of her debut album Sudden Change in Weather and since then she has released a further three chart topping albums, four No.1 radio hits and a slew of Top 10 video hits including a Country Music Channel No.1. The single Hung Up On You garnered over one million streams within six-months of release and her current single, Porch Party is past the 100,000 mark in only six-weeks and went Top 10 in just four weeks after entering the chart. Jayne has had multiple Golden Guitar nominations and has played main stages at all of the major Country Music festivals in Australia including CMC Rocks, Deni Ute Muster, Gympie Muster and Tamworth Country Music Festival. She is a regular at truck shows and festivals throughout the USA.

Jayne is available to share her knowledge and over the past 4 years has been on staff as a mentor at the Academy of Country Music here in Australia.

What topics Jayne can advise on:
- Branding & how to market that brand including working with a publicist and using social media.
- Sponsorship - how to get a deal and what your side of the bargain means and how to use it to grow your career.
- Live performance - how to put on a show and work with a band.
- Songwriting and song selection.
- The recording studio - how it works and how to approach it from the artist's perspective.
- Business management & touring. 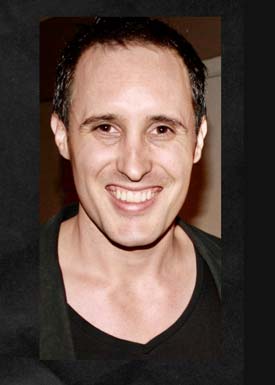 Before this, he was A&R/Label Manager at ABC Music. Holland helped the label become the market leader for local country music commercial releases in Australia, signing the likes of The Wolfe Brothers, Adam Brand, McAlister Kemp, Steve Forde, Jasmine Rae, Sara Storer and Sinead Burgess during his time at the label as well as overseeing A&R and marketing activities for the likes of Lee Kernaghan, Catherine Britt, Kellie Pickler, Emerson Drive, Doc Walker, Dean Brody, Jayne Denham and Travis Collins. During this time he was also invited to speak at the Billboard Country Music Seminar in Nashville.

He is also currently the host of the new country music podcast, the Tone Countrycast, which guests so far have included Blanco Brown, Jim Lauderdale, Kelsea Ballerini, Melaine Dyer, Shane Nicholson, Fanny Lumsden and The McClymonts.